The Battle Between The Flesh and the Spirit 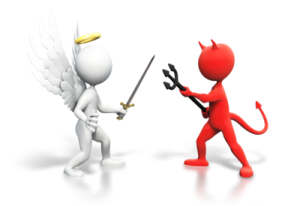 As members of the Body of Christ, we cannot be under the law and under grace at the same time. They are in total conflict and opposition to one another. You will find yourself under one or the other, not both.

In Galatians, the Apostle Paul uses the law of circumcision to explain this. Circumcision brought the Jews under the law, only it did not work. They could not obey God’s laws by being circumcised.  They still repeatedly fell into idolatry and other sins, as do we when we are living under the law.

When someone teaches or advocates the law as opposed to grace, they are placing themselves under the law.  When you are under the law, you are under a curse because the law requires perfection, which none of us can do (Galatians 3:10).

When you are living under the curse of the law, you will not have the freedom to live under the grace of the Cross because you will be ruled by your fleshly desires, which will not allow you to inherit the kingdom of God.  The Apostle Paul tells us which are the desires are of the flesh: idolatry, meaning you will have ungodly desires, such as an excessive desires for worldly things like money and success; adultery, meaning you will not have control over how you look at your neighbor’s spouse (Galatians 5:19-20.

Living by the flesh will not allow you to love your neighbor as yourself, which is the real law.

How do you get out from under the curse of the law? You repent and cease from wrong teaching and believing.